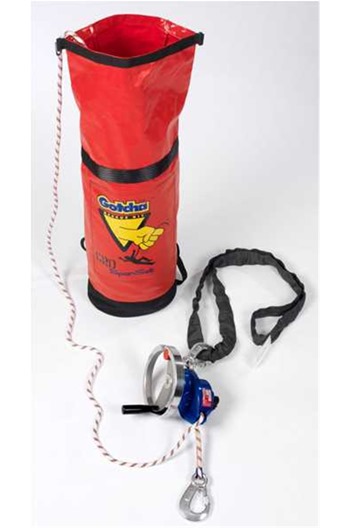 *Specifications and prices may change from time to time so please confirm before placing your order.

The “GOTCHA” CRD Kit is a pre-assembled rescue and evacuation system CE marked to EN341 Class A and EN1496. The system is designed to lower a casualty safely at a constant rate with no risk of an uncontrolled descent. The device can also be used to lift casualties over a short distance

The “GOTCHA” CRD Kit has been designed for either lifting, or lowering of a casualty for rescue. The device can also be used for evacuation from tall structures such as tower cranes and wind turbines.  With the simple addition of a pole and remote attachment the system can be used for recovery of a casualty suspended on his fall arrest equipment without the need to cut him free

DELIVERY IS 4-5 DAYS FROM DATE OF ORDER